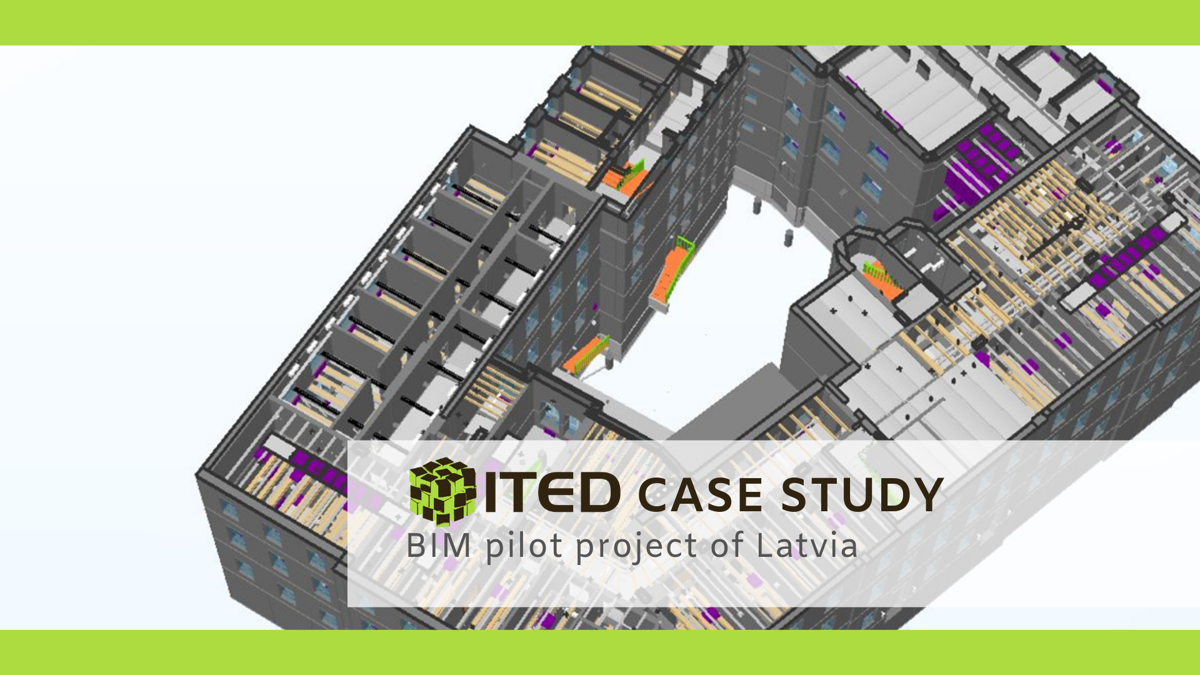 Earlier this year ITED's team managed the first Latvian national BIM pilot project for SJSC State Real Estate (Valsts Nekustamie īpašumi, VNĪ).
The project goal was to assess BIM workflow in comparison to a traditional 2D workflow for a medium-size refurbishment (7 000 sqm). Scope of works included 2D-3D conversion, BIM coordination, quantity take-off and estimate comparison, 4D BIM and other tasks.
The Pilot contract was won by Associaton for Construction Industry Digitalisation of Latvia (BUVID) with ITED being among its founders. In total, 11 companies and more than 25 BIM professionals were involved in the project delivery.
This case study explains why one of the biggest Latvian real estate owners decided to procure BIM for all future projects. 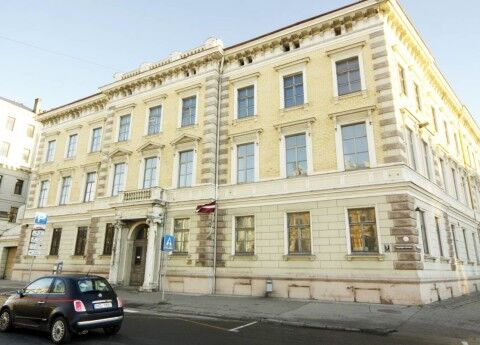 The building is situated at the border of the Old Town of Riga and is 130 years old.
It was decided that the Pilot will be executed in parallel with construction works after the design had already been done. The process allowed to compare results and amount of issues identified with BIM and on-site. Consequently, solid indications regarding the potential amount of savings were revealed, in case BIM had been introduced earlier.

The technical specification (TS) defined the tasks that had to be done and they were divided into three deliverables - BIM development, BIM analysis and As-built BIM development.
The first two had the duration of three months, and they are covered in this report. The third is still in process.
The main work packages (WP) were performed in the following sequence:

The first Pilot WP was to develop a BIM Execution Plan (BEP). The TS required models to be developed at BIMForum LOD300. LOD definition is a common approach to simplify the definition of what needs to be done. Though, it usually causes problems and Pilot was no exception - often defined LOD was insufficient for other activities, e.g. comparison of quantities. Such requirements were detailed and documented in the BEP. In parallel with BEP preparation, CDE was deployed. CDE solution was provided by the Latvian startup company OROCON.

The second WP was to create BIM models from 2D documentation of architectural, structural & MEP disciplines. Modelling timeframe was very short - 3 weeks. Few agile speed-improving decisions were made: 3 separate companies were developing an architectural model and the same amount - structural model. Revit work sharing is common in one office, but when it comes to 3 companies collaborating - drawbacks arise. IT support and private server configuration were required. As a result, models were delivered successfully after one building was modelled simultaneously by 8 different companies. 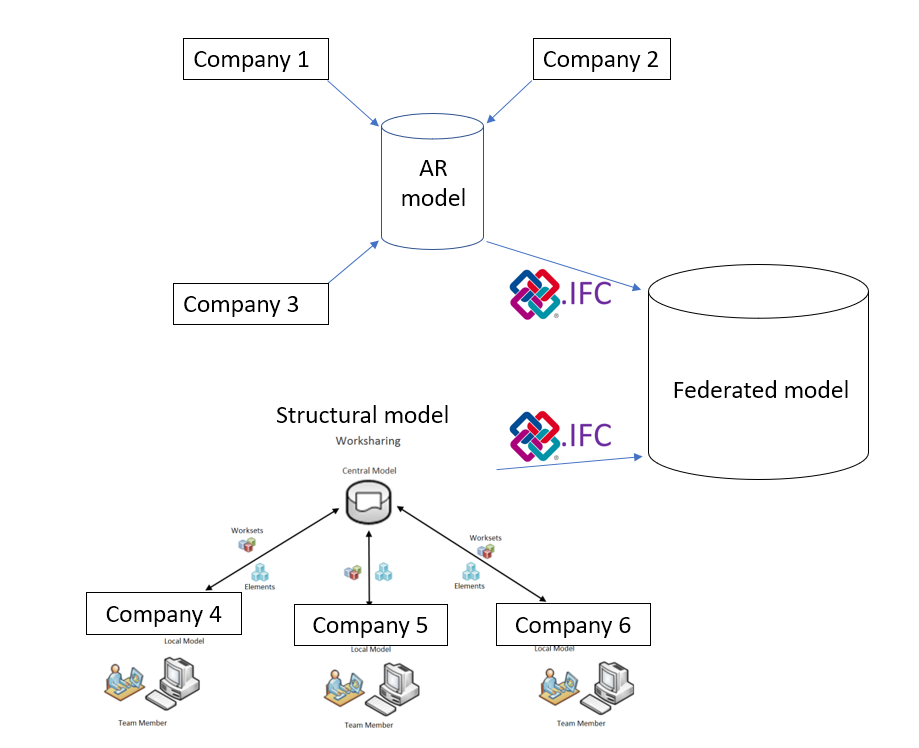 During the modelling stage, more than 100 design errors were found, missing or conflicting information. Many of these issues are quite impossible to make when 3D models are developed. For example, the same objects visible in one drawing were missing in the other, vertical pipe symbol locations were different between levels and other. 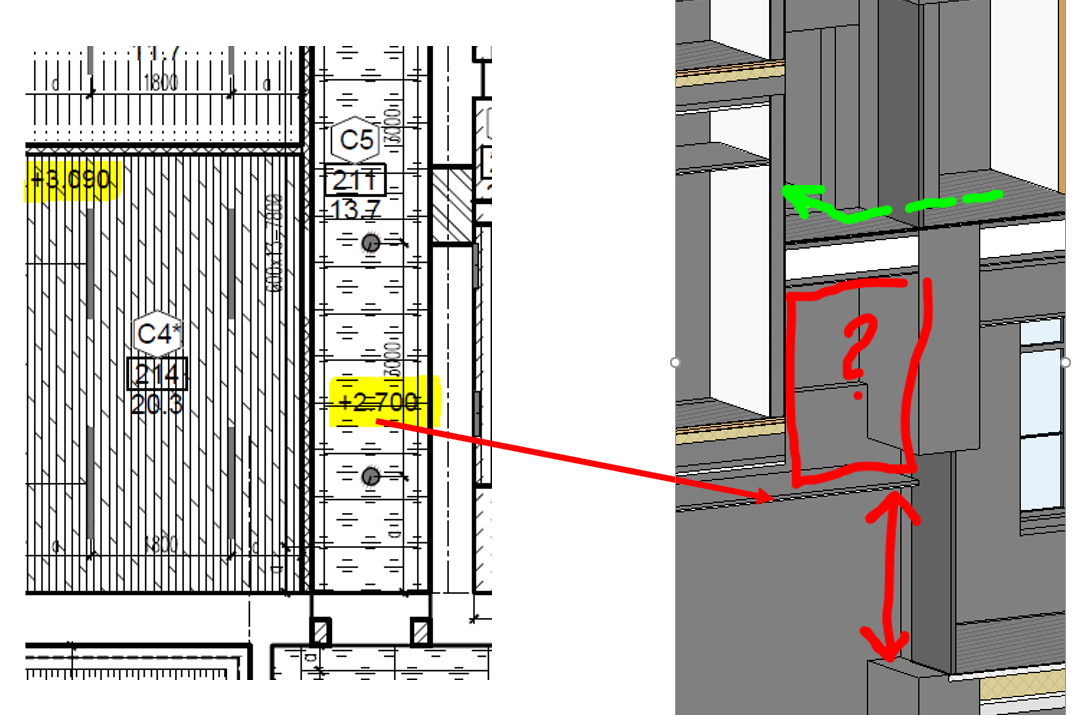 Celings in front of doors

To support one of the BIM uses, quantities comparison, separate models for existing, demolition and new construction phases were developed. This also proved to be valuable during the laser surveying stage and spatial comparison of models with point clouds. In parallel, the design errors of information gaps were aggregated in a single report and presented to the employer.

The third WP included the creation of the federated model and performing BIM coordination. Two methods were used: walkthroughs/sectioning/filters and rule-based automated clash detection. Each discipline model was checked with itself and then with all other disciplines using Navisworks Manage. 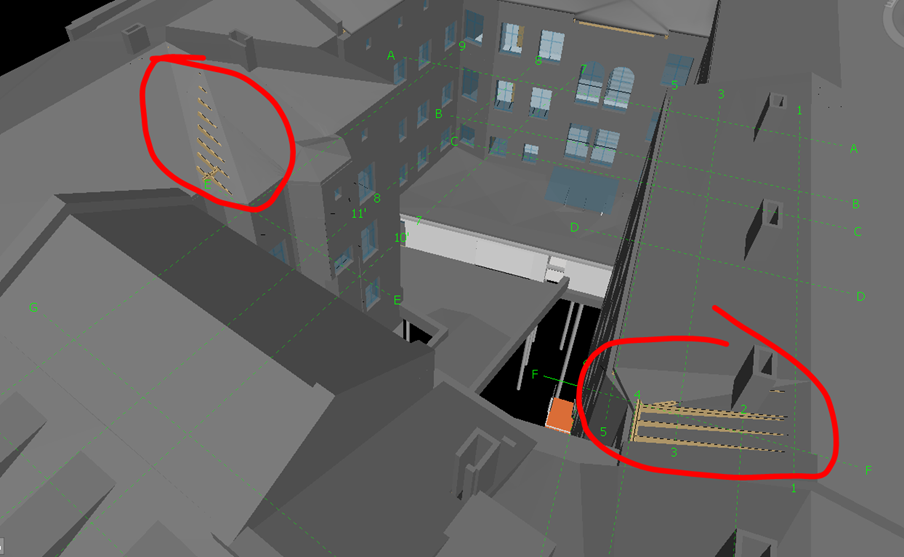 Structural elements outside of the roof 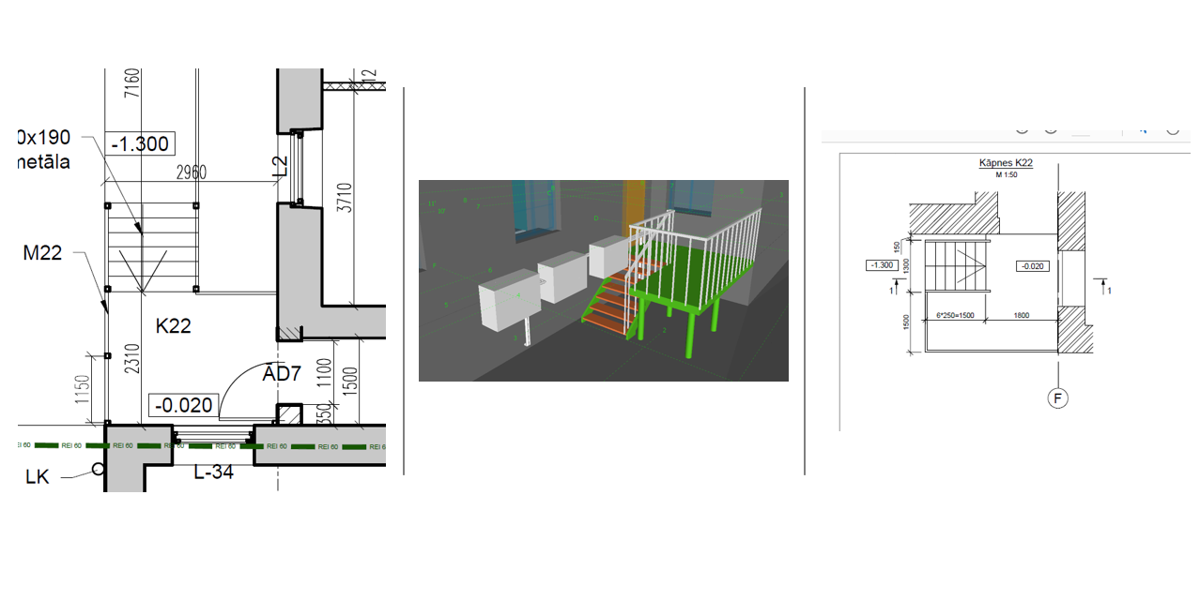 Differences between architectural and structural drawings in the same location 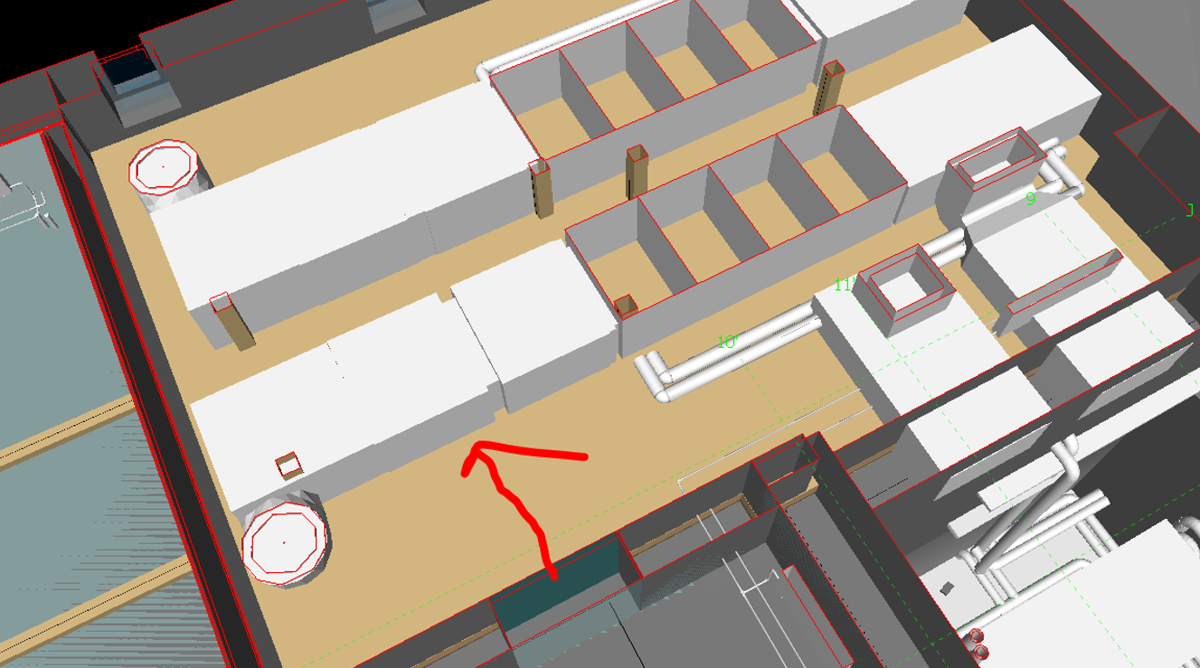 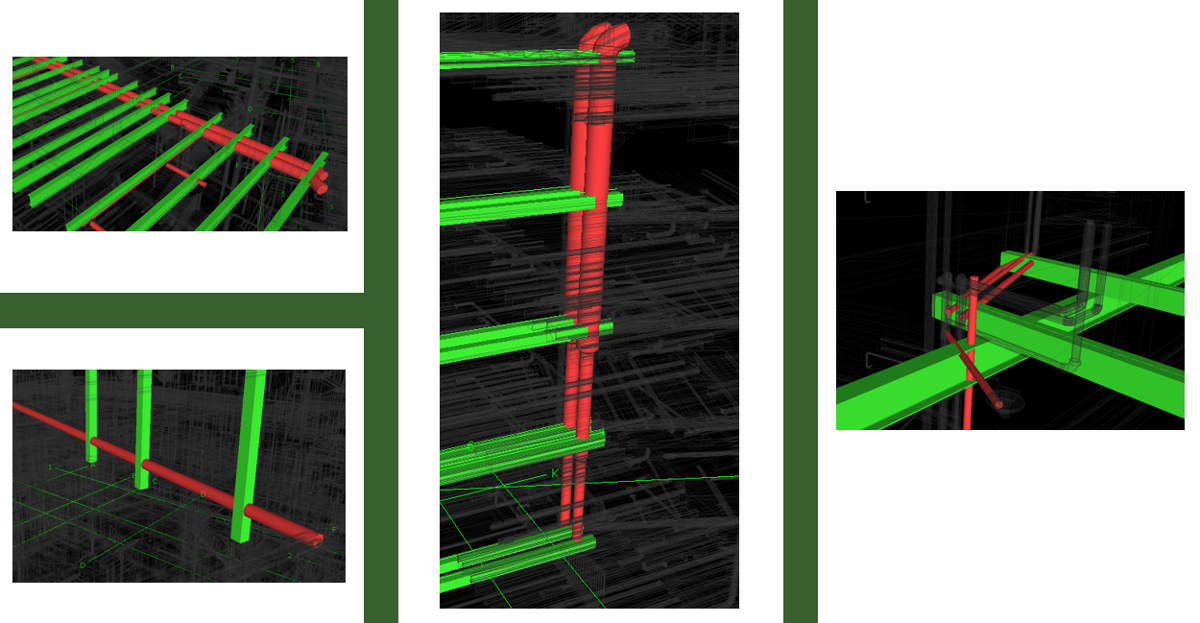 Clashes between pipes/ducts and structural objects

Clashes between ducts and structural objects 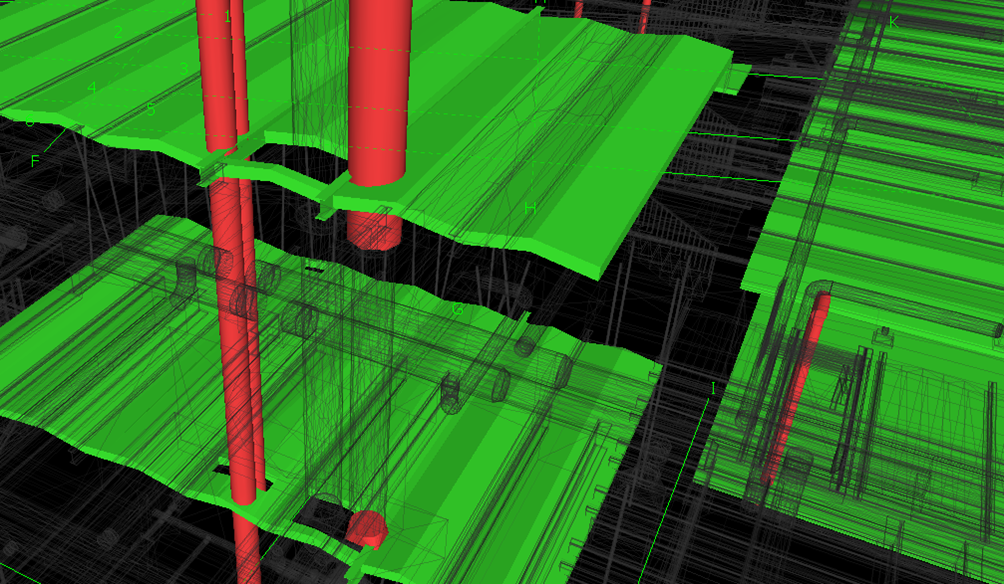 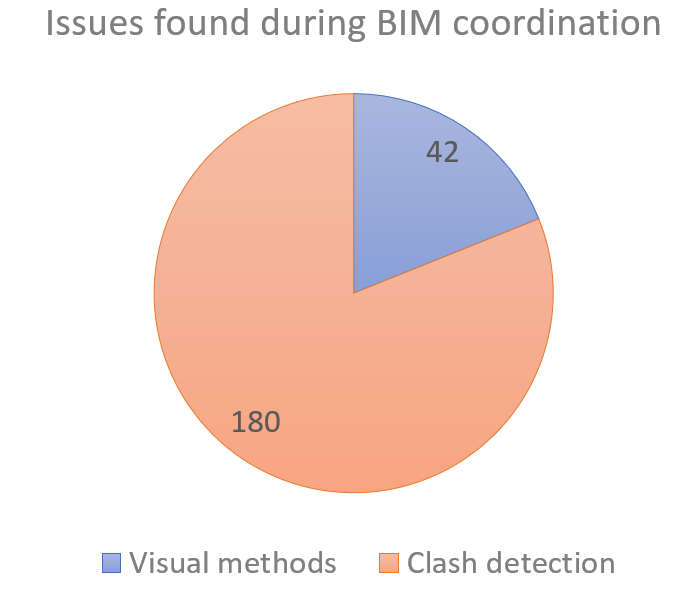 A simple estimate shows that dealing with these issues on-site costs a significant amount of money. The assumption was made that one issue can be resolved by 2 people in 2 days. In total it results in 7104 h spent. With an hourly rate of 20 EUR solving these issues would cost more than 140k EUR. 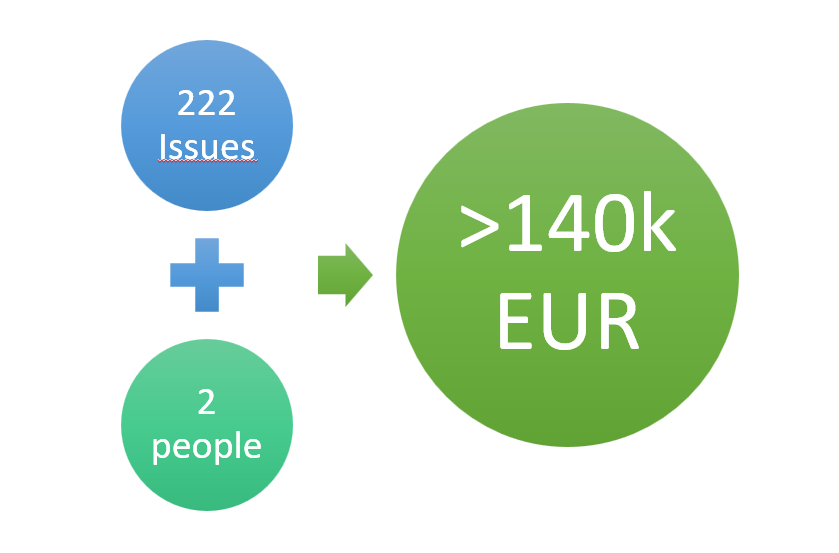 The fourth WP included the comparison of the bill of quantities developed during the design stage with quantities stored in BIM. Several assumptions were made:

Autodesk Revit was used - generated schedules in separate models, that correspond to BOQ structure, were exported to MS Excel.
Despite the mentioned assumptions, several important conclusions were made: 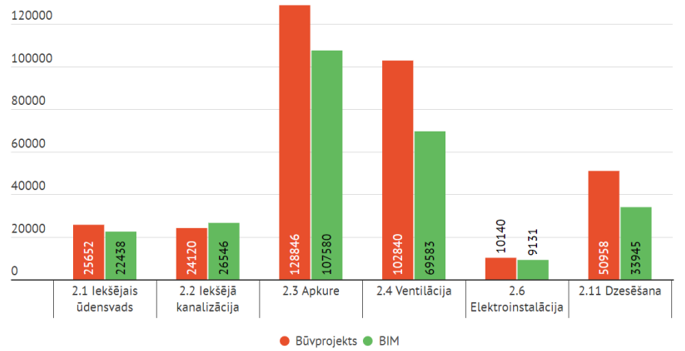 The fifth WP was to develop 4D simulation by adding confirmed construction schedule data to BIM elements. The process showed that provided schedules are uninformative, under detailed and virtually unusable for construction works planning. The video below shows how interior works would be done. The exterior walls are made transparent.

This WP was initially out of scope, and it was delivered for free to showcase the potential of laser surveying during construction. It was decided to scan after all the demolition works are done. Developed architectural and structural models also included this phase, and it was feasible to compare the differences between reality and BIM developed based on the original design. 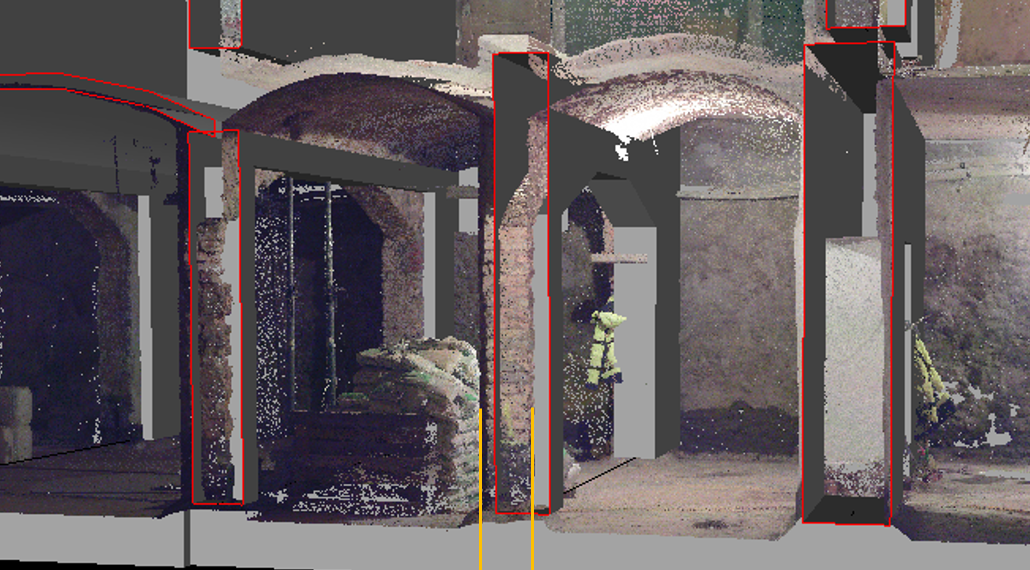 The Pilot was intended to show what are the benefits of BIM for the Latvian construction industry, especially for state and public clients. It can be admitted that this goal was achieved. Here are the main conclusions from the ITED team:

The Pilot proceeds with an as-built model development. More conclusions will be made and we will write about them. Leave a note if you want to hear about the second phase.

ITED's team was responsible for the project management, MEP model development and 5D scheduling in for this project.

If you want to know more about how to get the benefits for you projects schedule a meeting with us!